ALAP/ASAP exploration – What’s the difference between “cut” notes and gracenotes?

Posted by Andrew Douglas on Tuesday, December 21, 2010 · Leave a Comment

A while ago I posted a presentation about ALAP-ASAP, or, in other words, the principles of holding and cutting notes in “Swing Idioms.”

For some background for those who aren’t familiar with the topic of ALAP-ASAP, or the principles of holding and cutting notes in “swing idioms,” you can view my presentationÂ CLICK HERE. Check it out! 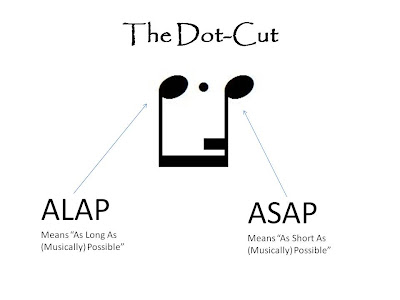 Here’s a GREAT question that pops up a lot:

If short notes should always be played as short as (musically) possible, then what is the difference between a short note and a gracenote?

I love questions like these – it means you’re really thinking about the principles, and trying to sort things out for yourself! Here’s my two cents on the matter:

ALAP/ASAP is a way to explain and gain control over the rhythmic elements of pipe music, specifically “Swing” idioms like Marches, Strathspeys, dot-cut Reels, dot-cut Hornpipes, etc. The bottom line for me is: The way we execute the dot-cut rhythm in these idioms bends the common rules of musical notation and interpretation. ASAP is a way of thinking of the “cut” part of this rhythm.

Meanwhile, back at the ranch, gracenotes are a different animal altoghether. Gracenotes, while they are named after melody notes, are entirely rhythmic devices. They are used to execute the rhythms that we are trying to express. Without them, piping in general would be impossible, because we have no other way of articulating notes. Tonguing is the usual method employed by woodwind players, but for us this is impossible, as we have a continuous air-flow coming from the bag; not from our mouths directly.

Actually, I personally would go so far as to say: essentially you should think of a gracenote as having no rhythmic “value” or duration whatsoever (in fact, that’s probably why gracenotes are written above the staff) – instead, think of them as rhythm creators, or percussive events. Of course, in reality they do have a very real duration – but to think of this as you’re playing will be countering their very purpose!

So, conceptually, gracenotes and “ASAPs” may actually end up the same or very similar in terms of duration, but it is important to distinguish the two different concepts at play;

Gracenotes are a rhythmical concept in piping; ASAP is a melodic concept!

Does that make any sense? If not – leave a comment!

Over and Out! AD