For those who struggle with mental aspects of performing or competing, this article is a must-read! 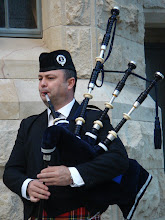 THE PSYCHOLOGY OF PERFORMING
By P/M Brett Tidswell

Piping, Drumming or playing in a Pipe Band has long been dominated by competition. Actually performing in the presence of an informed audience also forms a large part of what we do. There are equally the same pressures on the performer when playing in front of oneâ€™s peers as there is in competing. Many players fail to perform at their peak in front of an audience due to the distractions around them or those created in their own mind. Many performances also fall down when preparation is lacking. The most confident of performers will not play at their best on a poorly maintained instrument, or when their performance is inadequately prepared and rehearsed. On the other hand a well rehearsed performance on an immaculate instrument can crumble, due to the performer being nervous or inexperienced. Let’s take a brief look at some of the basics of putting together a performance both physically and mentally.